The Astrologer and the Daivagya


The Astrologer and the Daivagya
By Indranil Ray
The Astrologer who is desirous to predict anything, he can predict. Not a single thing is able to dominate his or her will (Saturn). After 10/15 years of practice when his or her prediction mostly matches then he or she has some confidence. Seeing that, anyone those the astrologer is unknown, he or she may think, it is the proud. But desirous (to predict anything) Astrologer should always be confident not proud.

Astrology is such a thing, proud comes easily because of Jupiter. Some people say an astrologer must tell in “yes” or “no” mode. No “if” or “otherwise” or “else”. This kind of thing, is not written in any classics of Astrology.Astrology is a Language. If you understand this language, The Sky speaks to you. Yes, it is a Language. No person can restrain the grammaticism. It is also the sign of Jupiter.

There is the gap between, “Prediction” and “Conclusion” .Prediction is the “indication” of the incidents. It happens before the incidents by the Astrologers. Conclusion is, after the incidents. For any prediction of any incidents, there is the possibility. Possibility of how much? Above 50% possibility is that, the incidents may happen. Less than 50% means, it does not happen. The Astrologer should higher heart to confess, if it does not happen, otherwise how the Astrologer should learn? The learning process should continue through mistakes. It is the property of Saturn. Common people folds the “Daivagya” with the Astrologer, which is Jupiter’s possessions. Astrology is the combination of Science and Arts. One Astrologer before their prediction, studies vividly the charts in many more angles, in more techniques. It is the possessions of Saturn.


But “Daivagya”s are such kind of persons, he or she knows “Daivee Aagaya” or “Divine Will” or Commandment. There are 800 crore human beings in the world. Within that, there is below ten people are “Daivagya”s. Moreover Daivagyas will not do any mistake but Astrologers do. Acceptance of Mistakes makes one, real human being. The prediction becomes wrong for many reasons. How the Saturn plays, it depends on that and that only. Mars will make some arguments, but Saturn always purifies the inner soul. So Astrologers should always pray to Saturn, so that HE does not make any mistakes by us. Saturn is the real giver to the human. If HE wants “I will make this human perfect, HE will do mistakes by that human, so that the human learns in real-perfect way and rapidly.

Because truth are hiding in the mistakes. This has been taught by the Astrology to us. If Astrologer accepts his/her mistakes, real people will never think as a fool. Real people will think, more focused and accurate. Because from mistakes, the things can be learned, which never be taught by any teacher in the world.

An astrologer should practice natal chart as well as horary. Basically for the horary, the time,
date and place are accurate. He should practice also Amsha charts
(especially D9, D10, D30 for horary),Shatbala, Vimsopaka, pada chart, Planetary friendship, and of course Dasha, Antardasha and Pratyantar Dasha etc.In every time chart has been in the brain. Today’s there are so many Jyotish Apps are there, one should use it in mobile.
Just few days back (20.08.19) this writer write in Facebook and WhatsApp about
Whether Mr. Chidambaram will go to jail? The question time is 14:32@20.08.19@Kolkata.I write
“Rising ascendant is the Sagittarius. It is a Pristhodaya Sign, The ascendant is 7.37 degree, which means
in Sthir part, it falls. Dasha is going for Mercury-Rahu. According to compound relationship both are
enemy of Lagna lord. Mercury is the 7th lord & 10th lord, posited in the 8th, Rahu is in 7th .

Afterwards, Dasha will be Mercury-Jupiter. Jupiter (the 1st and the 4th lord) situated in 12th sign,
Scorpio, natural zodiac 8th house. In Krishnamurti Chart (Nirayana Bhava Chalit), planets are shifted to the 8th house. In Mercury & Jupiter, there is Ithasala yoga. I should say, he may be asked for serious
questions, going into jail may be delayed only because of Asc falling in the Sthir part.
But tremendous mental pressure is really on till 8-1-2022.From the 03-10-2019 to 08-01-2022,
chance is there that he may go into jail.”
Chidambaram was arrested at 21st August 2019 after such a long long drama.

The prediction is perfect. But from a WhatsApp group, a gentleman makes some argument that,
why writer writes “may or may not arrest”. The writer understands it is Mars, who made some illogical arguments,
because writer did not write “may not”. It is the war between Mars and Saturn. Astrology is the
science and arts which requires practice and practice.
While doing practice for a long term in everything, a sixth sense has been developed.
But if one tell the sixth sense is intuition he may make a great mistake. Here sixth sense means
“special intelligence” , seeing the charts.  Because in Astrology, planets have immense role,
then the stars. Like in maximum internet sites if you give the DOB, TOB, POB, it will predict.

As for example, if you want to know what one should study? It will say he may study Engineering,
Medical or any technical lines. But there is hell and haven difference between Medical and Engineering.
This requires practice. This brought by, Saturn and Saturn only. If Mars is being posited in a bad house
or sign or become the bitter enemy planet, he cannot hold prediction in broad spectrum like Facebook,
WhatsApp etc.

Mars helps to bring that prediction in market. Like Mecury helps to bring the correct
thing in correct place. In the writing of Sunil John, Editor of Saptarshi Astrology, it is found that a
gentleman wanted to publish his book of Astrology, where his mistakes and prediction does not match
with the conclusion. He writes, as he wants that other person would not make such mistakes. It is also
the working of Saturn. Saturn wants to teach but nobody have time to listen.
The prediction given by this writer, “Who is the owner of Today’s Durand Cup
Mohunbagan Vs Gokulam Kerala” was written in the Facebook wall. Basically Game Prediction is
not so easy. After huge study, it has been seen sometimes, game-prediction fails. In that case
Astrologer need to more study and practice. Other predictions are easy comparing game prediction.

In the semis, this writer predicted, “East Bengal lose, Mohunbagan wins”, that happen accurately. Anyways the prediction was “Play start at 5 PM. Now it is 3:45 PM.My prediction is Mohunbagan may win this game.How?23/08/2019@18:41@Kolkata .It is Kumbha (Aquarius) Lagna, the Sun,
Rahu and Saturn(R) are seeing it. The Sun’s Mahadasa and Mercury’s Antar Dasha are going on. In play ground there may be terrible/ very bad/ appalling things happen. The Sun and Mercury both have “childhood” state. The Sun is in his own house, Leo and Mercury is in Cancer, the 6th house. In compound relationship the Sun is enemy but Mercury is neutral and friend in natural relationship.” Everybody knows Gokulam Kerala wins the match by 2-1. It is told at half time of the match, there
was the mistake. The Sun enemy of Lagna and Mercury was neutral. But I got that Mercury was the natural benefic. The Sun and Mercury both have childhood state, it is analyzed but didn’t take those. It is thought as the rising sign is Aquarius, Saturn, Rahu when aspected, then if Sun aspects then it doesn’t matter. But it matters. Conclusion shows that.


Now about the correct prediction, which was published in May 2019 in Express Star Teller, The Astrological eMagazine, Astrological eMagazine. This writer writes in  the article,  “If we see Narendra Modiji’s chart, we will find that, from 27-02-2019, he will start Ketu Antardasha, under the Moon Maha Dasha. The Moon is his 9th lord. Ketu has been posited in the 11th, its best position. The Moon is posited as Neecha Vanga Raj jog in Scorpio as Mars is also posited in Scorpio. This depicts his Prime Ministership will once again get elected. In India’s Independence chart, from 10-08-2018, Moon/ Jupiter, Dasha Antara is going on till 10-12-2019.Both are posited in square. This position is good for reelect. Moreover Rahu is in the Ascendant, is aspecting Jupiter and the 10th house, whose lord is Saturn. Moon/ Saturn Dasha Antara will start from 10-12-2019.Saturn is the Raj Yogkari planet of Taurus. Will BJP win the Loksavha election in 2019? This Prashna came into my mind, in the Date of 4/9/2018, Time 11:00, Kolkata. The Rising sign is Scorpio, Seersodaya, Fixed sign aspected by Rahu. In 10th there are the Sun and Mercury. It is declared that BJP will win the coming Loksavha Election. In 10th house Mercury, depicts that BJP’s win will be more at alliance.”

This analysis writer does on  4/9/2018.That time, in maximum peoples mind was, BJP may lose. But just after Pulwama incidents, India’s mind has been change. But at that time before Pulwama incidents, the writer writes BJP wins. Here also a reader said to the writer, “In 10th house Mercury, depicts that BJP’s win will be more at alliance.”  But he does not see that the writer writes “The Moon is posited as Neecha Vanga Raj jog in Scorpio as Mars is also posited in Scorpio. This depicts his Prime Ministership will once again get elected.”The writer also writes “In India’s Independence chart, from 10-08-2018, Moon/ Jupiter, Dasha Antara is going on till 10-12-2019.Both are posited in square. This position is good for re-elect. Moreover Rahu is in the Ascendant, is aspecting Jupiter and the 10th house, whose lord is Saturn. Moon/ Saturn Dasha Antara will start from 10-12-2019.Saturn is the Raj Yogkari planet of Taurus.”

Actually this is Mars, whose nature is to argue. Astrologers are not “Daivagya”. They read the chart on the incidents and calculate. Basically Astrology comes from 8th house. It is the nature of the 8th house. Agreement and disagreement. Daiveevani is from the 9th house.  The 8th house is the 12th of the 9th house. So it happens. People think Daivagya and Astrologer are the same. Generally people fold the term “Daivagya” and the Astrologer. Astrology is the combination of Science and Arts. One Astrologer before their prediction, studies intensely the charts.
This Astrologer predicts at recent Chandrayaan-2 module, that “once it soft-lands on the Moon, India will join an elite list of countries ever to soft-land on the surface of the Moon with homegrown technology. Chandrayaan 2 is also the first Indian mission to explore the mysterious terrain of Moon with indigenous space-technology. Let’s do the forecast. It has been drawn the chart on 18th July 2019@19:47 at Kolkata. The Moon and Venus are the Dasha and the Antara. Venus is in the 6th .But according to the retrogression of other planets some issues may not work in proper manner.”

Everybody knows, what happened to Chandrayaan 2.
In most classics there is the difference between the “Daivagya” and the “Astrologer”. “Daivagya”s are God Gifted and Astrologers are the study, study and study. Practice, practice and practice. One must not know how much dedication and study is required to give a prediction of incidents. It is also the property of Saturn.

Critics for the sake of the critics, may criticize, the desirous astrologer may smile at that.

Because critics (Mars) are not aware of the patience (Saturn) of the Astrologer, who study Astrology, which is a Language.

If one understands this language, the Sky speaks to him/her.

He is Msc in Information & Technology, MCA (Master in Computer Application), MA [Astrology] (Gold Medal) from PST University,Hyderabad, NACC Accredited].He got First Class in all the three Master Degrees.

He is Regular contributor of The Express Star Teller, Modern Astrology,The Astrological eMagazine, American Federation of Astrologer, BhagyaBarta, Soubhagyer Vedabani and
many other Astrology magazines in India.

At present he is practicing Astrological Guidance and Consultancy for many years.
Email: indranilray2008@gmail.com
Facebook :Indranil.ray3
WhatsApp 91-9433031757 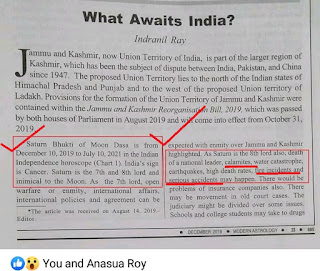 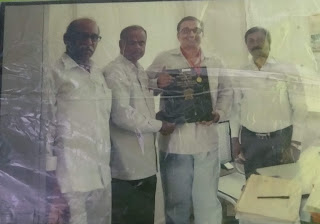 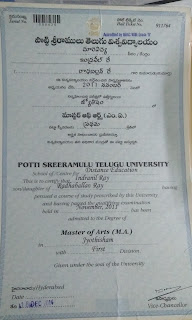 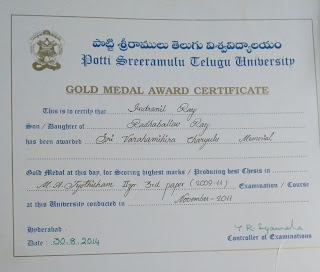 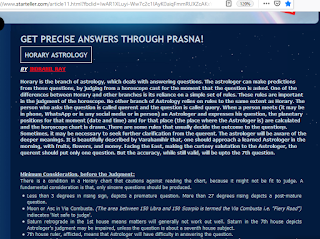 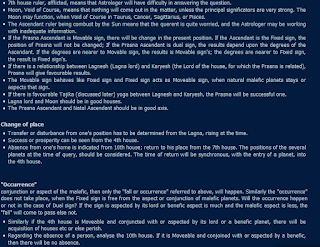 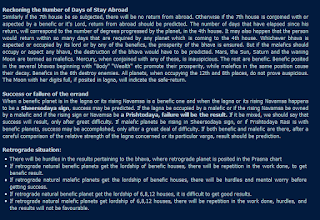 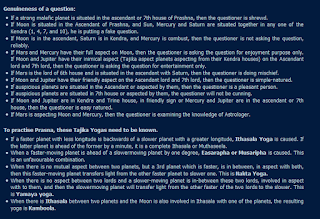 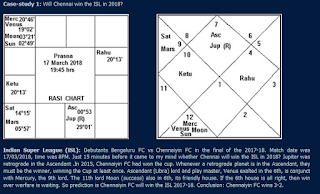 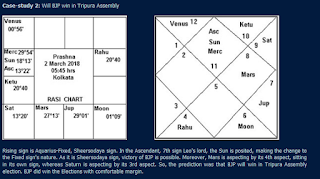 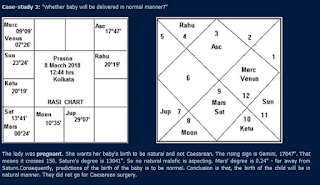 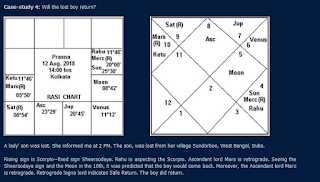 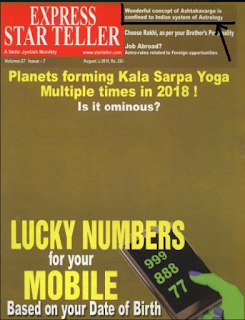 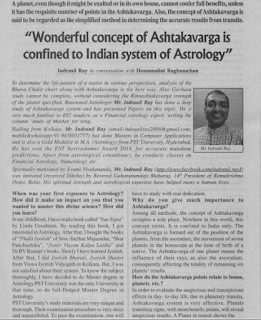 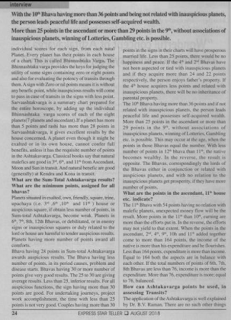 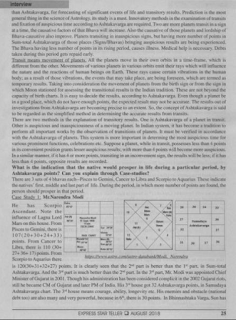 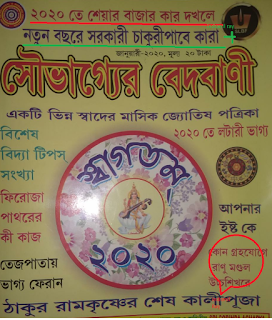 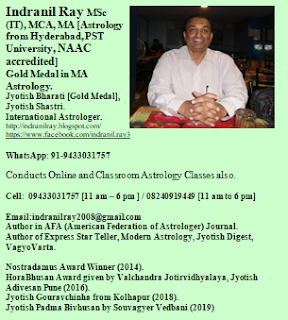 Posted by indranilray at 9:40 AM No comments: Links to this post